A Group of Gold Repoussé Reliefs attributable to Cesare Targone

While a quantity of objects have been reasonably attributed to Guglielmo della Porta (1515-77), less attention has been given to the distinction of his collaborators. As a result, various artworks have doubtless been given Guglielmo’s signature authorship while they could instead be the workmanship of qualified assistants working from his models and designs.

In the survey of art historical literature, observing the distinction between individual craftsmen in a workshop has been an arduous undertaking with attributions debated for great lengths of time and few documents available to definitively confirm artistic authorship. Adding to this complexity are the diverse roles assumed by workshop assistants as well as the succession of ownership and diffusion of a workshop’s models which can make secure attributions virtually impossible.

We could compare this art historical maze with the past century of research invested in delineating the evident qualities that distinguish the workmanship of assistants operating in Giambologna’s (1529-1608) workshop: Antonio Susini, Pietro Tacca (1577-1640), Adriaen de Vries (1560-1626), et al. It is expected the artists active in Guglielmo’s workshop will be equally discussed in coming decades, a process first initiated by Werner Gramberg and Ulrich Middledorf who made great advancements in our understanding of Guglielmo’s output. It is the present author’s hope that the observations and ideas presented in this series of articles, tentative as they might be at times, may serve as a clarifying step in the course of understanding not just Guglielmo himself but also the distinct work of those with whom he collaborated.

Rosario Coppel commented, “A comparative study has yet to be made between Guglielmo’s documented works and those of his workshop assistants.”[1] It is this challenge of being categorical about the individual artists in Guglielmo’s circle that the present author adopts as the role of this series of articles concerning the “Gran Scuola” of Guglielmo.[2] 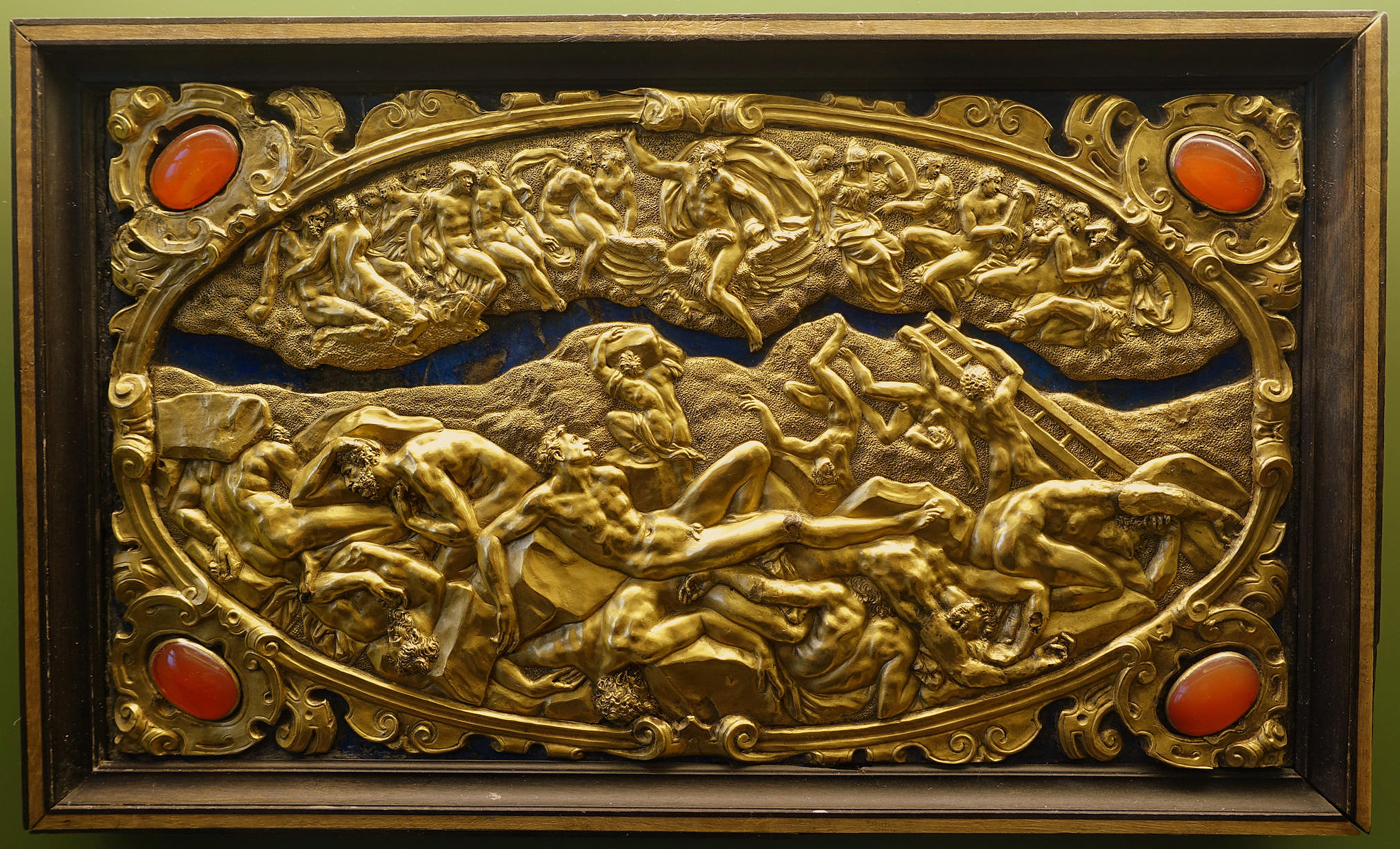 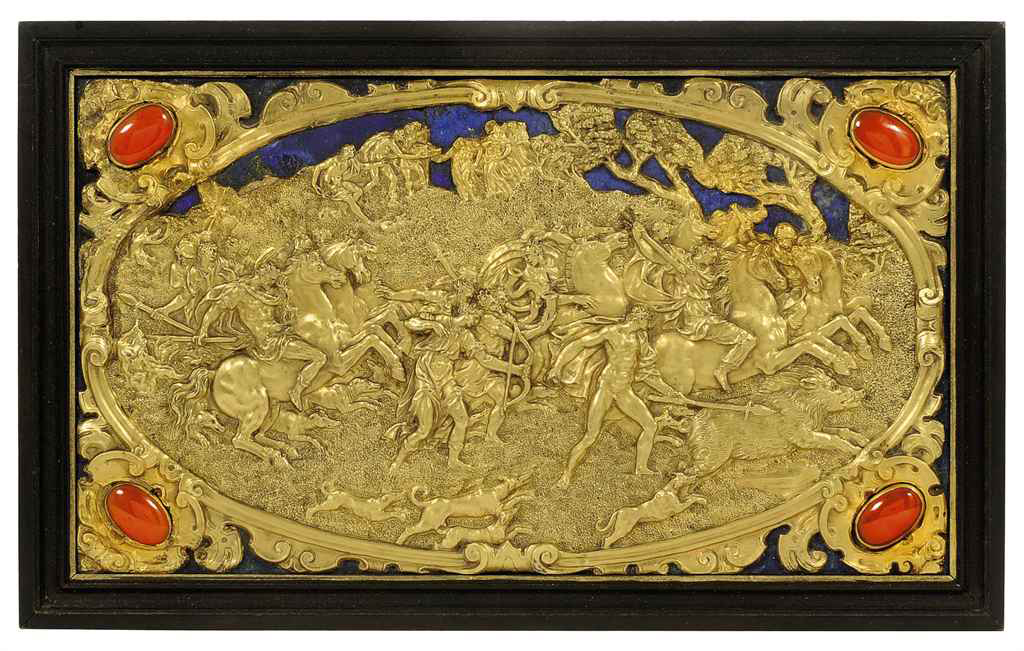 A GROUP OF GOLD REPOUSSE RELIEFS ATTRIBUTABLE TO CESARE TARGONE

An exceptional group of eight gold repoussé reliefs depicting scenes from Ovid’s Metamorphosis, mounted on lapis lazuli and embellished with carnelians (Fig. 01) are known in various collections: six reliefs at the Bode Museum,[3] one at the MET,[4] and one in a private collection.[5] [6]

The designs comprising the Ovid series are established as the invention of Guglielmo della Porta (1515-77)[7] while their execution in sculpted relief are due to his assistant, Jacob Cornelis Cobaert (d. 1615), ca. 1550-60.[8]

A pair of larger cast silver examples of The Fall of the Giants and The Battle of Perseus and Phineus are kept in the Clementine Gallery at the Vatican, first attributed by Eugène Plon to Benvenuto Cellini (1500-71)[9] though properly attributed now to Guglielmo and his school. While addressing the smaller bronze casts from the series, coinciding in scale with the gold repoussé edition, Emile Molinier followed Plon’s initial attribution to Cellini in his expansive volume on the subject of plaquettes.[10]

Leo Planiscig was the first to diverge from Cellini’s association with the Ovid reliefs while cataloging bronze examples from the Este collection.[11] Planiscig instead suggested they were the work of a Roman goldsmith ca. 1540, due to their exhibited influence from Perino del Vaga’s (1501-47) designs. Incidentally, Guglielmo was an assistant and friend to Perino[12] though Planiscig called attention to the semblances between the Ovid reliefs and the work of Giovanni Bernardi (1494-1553), another sculptor of small reliefs and also an astute follower and collaborator of Perino’s.[13] Ernst Bange was the first to discuss the gold repoussé examples received by the Berlin museums. Bange followed Plon and Molinier in ascribing the group to Cellini due to their impressive technical execution.[14]

Published in the same year as Bange’s discussion of the series, the proper identification of the reliefs with Guglielmo and his workshop was established by Rudolph Berliner who connected the series with the documents pertaining to the 1609 trial initiated by Guglielmo’s son, Teodoro della Porta.[15]

When curator John Goldsmith Phillips later wrote about the gold repoussé example acquired by the MET, he suggested the group could be the work of Antonio Gentili da Faenza as the trial records indicate he owned models from the Ovid series.[16] The idea that Gentili executed the gold reliefs remained unchallenged by Werner Gramberg in his in-depth study of the series.[17] However, Beatriz Chadour’s later thesis on Gentili’s oeuvre notes that his possession of models from the series did not ensure he was responsible for executing the gold repoussé examples. Chadour also comments on the differences observed on the gold reliefs versus other versions, suggesting they were made sometime after Guglielmo’s death in 1577.[18] She notes their correspondence with a gold repoussé Entombment at the Walters Museum (Fig. 02), discussed earlier by Ann Gabhart, and whose stylistic features are subject to the same critical concerns as the gold Ovid reliefs.[19]

In discussing the relationship between the gold Entombment and Ovid group, Gabhart noted their similar technical execution involving punchwork, the handling of anatomy and treatment of the hair, notwithstanding their parallel format of gold repoussé mounted on precious stone. She twice suggested they are the work of the same unidentified master operating in the circle of Guglielmo’s posthumous workshop.[20]

The gold Entombment is today accepted as the work of Cesar Targone whose oeuvre was expanded when an autograph relief by Targone depicting the Virgin Mourning the Dead Christ emerged from a private collection (now at the Getty Museum) and was discussed by Ulrich Middeldorf who connected it with the Entombment relief.[21] However, to the present author’s knowledge, amiss from Middeldorf’s survey was any further discussion of the gold Ovid reliefs previously discussed by Gabhart. It is perhaps the possible exclusion of these reliefs from Middeldorf’s discussion that has led to the perpetuity of their association with Gentili.

The present author’s own observations, prior to knowledge of Gabhart’s analogous remarks fifty years prior, are the impetus for this revaluation of the gold Ovid group. While Gabhart recognized the Entombment and Ovid reliefs were by the same hand, the maker of these exquisite works had yet to be identified and her observations appear to have since been overlooked.

As Gabhart notes, there are evident synchronicities between Targone’s Entombment and the Ovid reliefs. The preference for a dense and meticulous stipple treatment for the ground can be observed and is especially apparent on his autograph relief of the Virgin Mourning the Dead Christ (Fig. 03). Targone’s preference for vibrantly detailed hair can also be compared (Fig. 04). These distinctive treatments divorce the gold reliefs from Cobaert’s models reproduced in terracotta and bronze. Such characteristic features are also lacking in the work of Gentili. While Gentili’s capabilities in anatomical excellence are alike, his modeling for hair is very different from the incredible degree of detail and refined intensity of Targone’s technique (see Fig. 06). Gentili’s modeling of hair in his small reliefs and sculptures prefer a simpler realization, being smooth and flowing in a way that enhances rather than distracts attention from his superb proficiency at  rendering anatomy.[22]

Further disassociating the gold Ovid group from Gentili’s authorship are their framed borders which deviate from the decorative vocabulary observed on Gentili’s other works. While certain features are characteristically superficial for the period, they are less dense in their execution than the rigid detail exacted on Gentili’s framed treatments for rock crystals set into his Farnese altar cross or those rendered for the Farnese casket. Targone’s preference for mounting his exquisite reliefs to precious stones is also an accepted hallmark of his work unlike works traditionally given to Gentili’s conception. Targone’s activity as a dealer of precious stones may also account for their incorporation into his work.[23]

In closing, it is worth reiterating Gabhart’s consideration for the utility of the gold Ovid reliefs. Her suggestion that the Acts of Francesco I reliefs, executed by Targone in collaboration with Antonio Susini after designs by Giambologna (1529-1608),[24] were employed for the decoration of a cabinet and prompted her to suggest the gold Ovid reliefs may have originally been intended for a piece of furniture. Gabhart also notes Guglielmo’s mention of the Ovid series in a 1575 letter in which he comments on: “Sixteen stories (Greek) morals of silver and gold for table ornaments.”[25]

2. For a discussion of the cultural environment within which Guglielmo’s workshop operated see C.D. Dickerson III (2008): The “Gran Scuola” of Guglielmo della Porta, the Rise of the “Aurifex Inventor” and the Education of Stefano Maderno. Storia dell’arte, 121, pp. 25-71.

3. Representing scenes of the Fall of the Giants, Procession of the Drunken Silenus, A Bacchanal, Dancing Nymphs in the Forest, Death of the Niobids, and the Battle of Perseus and Phineus (respectively Inv. Nos. 2909-14), all received from the collection of Hernn Salomon in 1905.

5. This eighth scene depicting the Hunt for the Calydonian Boar was previously thought lost until appearing at auction via Christie’s on 9 December 2010, Lot 285.

6. The complete series of eight elongated oval reliefs and a further eight octagonal reliefs are known by a full set of casts at the Kunsthistorisches Museum (see Inv. Nos. 7756-71).

16. John Goldsmith Philips (1939): Guglielmo della Porta – His Ovid Reliefs. Bulletin of the Metropolitan Museum of Art, XXIV, pp. 148-51. It should be noted that Phillips understood the attribution to Gentili as tenuous, commenting: “If our gold plaquette was not his [Gentili’s] work, it was certainly made by some other goldsmith of his period.”

19. For a discussion of the gold repoussé Entombment to which Chadour refers, see: Ann Gabhart (1968-69): A Sixteenth-Century Gold Relief. Journal of Walters Art Gallery, XXXI-XXXII, pp. 29-39.

21. Ulrich Middeldorf (1977): In the Wake of Guglielmo della Porta. The Connoisseur,
No. 94, pp. 75-84. Note: the present author is unable to locate a copy of this article to determine whether Middeldorf indeed overlooked the Ovid reliefs in his survey of Targone’s works.

22. For comparison (Fig. 06) see the modeling of hair for the Virgin Mary and Annunciation reliefs on Gentili’s cover for the Farnese Hours or the hair featured on a group of angels from a version of Guglielmo’s Mount Calvary relief which the present author considers to be an embellished cast by Gentili (from a private collection and formerly with Coll & Cortes Fine Arts).

23. For Targone’s activity as a dealer see Martha McCrory (1980): An Antique Cameo of Francesco I de’ Medici: An Episode from the Story of the Grand-Ducal Cabinet of Anticaglie. Le arti del principato Mediceo. Florence, pp. 304-05.