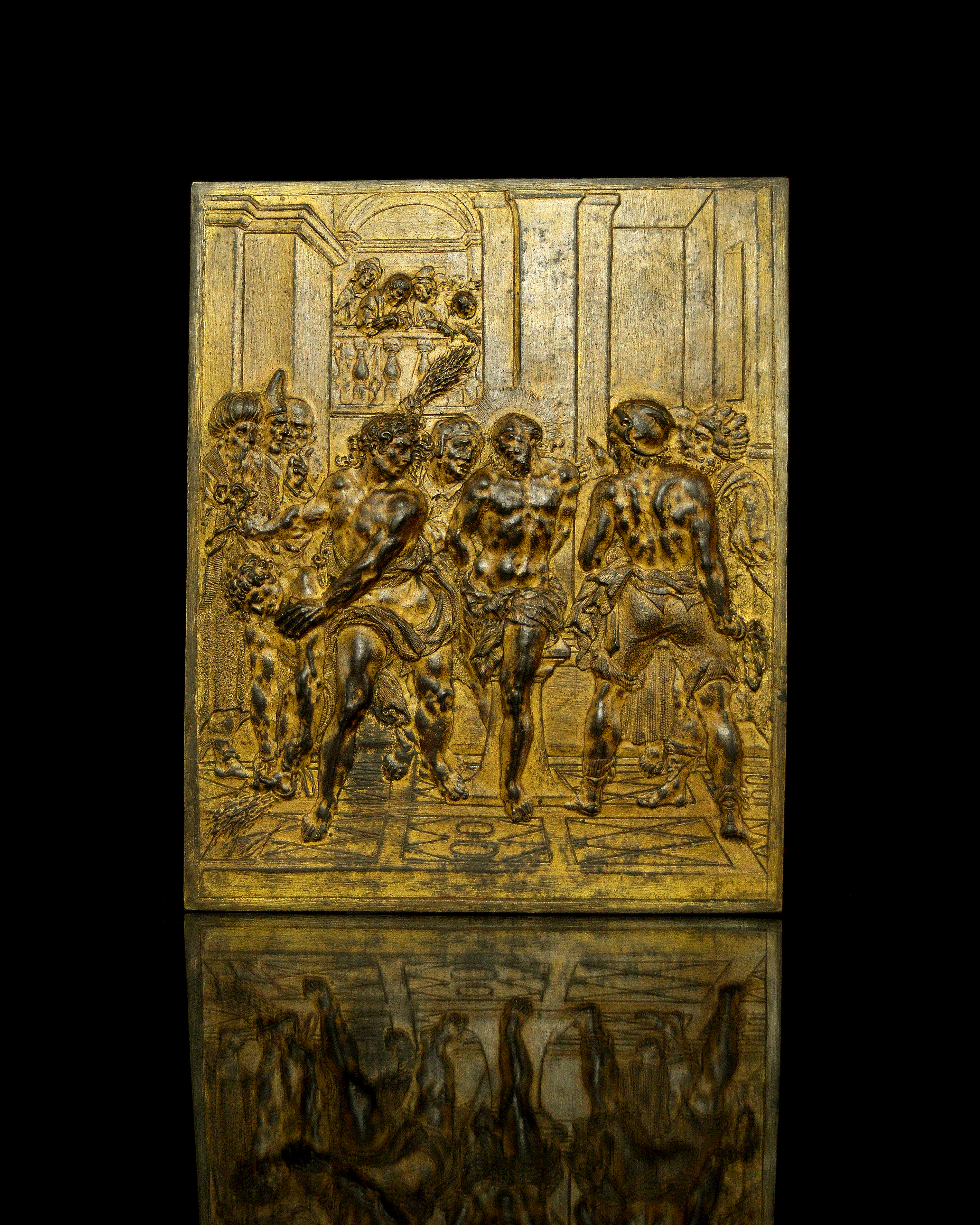 FLAGELLATION OF CHRIST (No. 68 / Riddick collection)

Contemporary cast. Gilt obverse, rubbed along the margins and high points of the relief. A slight scratch to the surface running along the abdomen of Christ. Slightly incuse reverse reproducing the canvas ground upon which the relief was worked. A marginal lip present along all sides save for the upper margin. A reddish brown lacquer painted over the reverse. Caked blackened resin residue present on portions of the reverse.

Roberto Paolo Ciardi (1965) first documented an example of the Flagellation of Christ from the Cagnola collection, commenting on the object’s Northern appearance yet also its possible influence from Venetian prototypes from the last half of the 16th century. A decade later an example from the Molinari collection at Bowdoin College was discussed by Ingrid Weber (1975) who suggested a Spanish origin for it based on certain characteristics, in particular the feathered headdress worn by the right-most attendee in the scene.[1] Weber (1976) also noted the style of the nimbus surrounding Christ which likewise hinted of a Spanish origin. Weber (1976) identified the source for the relief, a 1593 engraving by the Flemish artist Aegidius Sadeler II (ca. 1570-1629) who was active in Rome at the time (Fig. 01). The engraving reproduces a distinguished painting by the Italian artist Giuseppe Cesari d’Arpino (1568-1640). The vibrant composition is known by a quantity of other early sketched and painted reproductions and Weber (1975) cites one additional plaquette modeling its design after Sadeler’s engraving.[2] More recently, Francesco Rossi (1992) considered the Flagellation of Christ to be the production of a Flemish sculptor from the early 17th century while Mario Scalini (1999) followed Rossi’s assessment for a possible Flemish origin in his updated catalog of the Cagnola collection.

The author of the present relief was likely inspired by the sculptural volume of the figures comprising Sadeler’s engraving, thus making it an ample printed source from which to render a low-relief plaque. While the compositional invention is not the sculptor’s own, his ability to translate the design into relief is of utmost talent. The intense musculature of the figures is convincingly translated and the expert casting of the present plaque preserves an incredible level of fine detail rarely accomplished in this medium.

The present relief is known by only four additional documented examples, two gilt in silver and two in gold.[3] Each example varies with respect to their surface treatment and the group is probably the collective product of a single master and one or more assistants. The reverse of the Cagnola collection example features the same canvas texture reproduced in the present cast, crudely patinated with a reddish-brown lacquer with traces of blackened resin and likewise featuring a small marginal lip. The conforming treatment to the reverse of the plaques indicates the Flagellation of Christ reliefs are likely the contemporaneous output of a single workshop. The upper margin of the present relief appears to have been trimmed or carefully filed away, resulting in the unusual lack of a lip along its upper margin. A series of at least four casting sprues were integrated along the top margin, evident by slight protrusions where they were merged with the relief model. This must have been planned, aiding in the reduction of work required in finishing the relief immediately after being cast. Other traces of casting sprues are evident along the surface of the reverse. The presence of the canvas texture on the plaque’s reverse indicates the relief was prepared in wax or clay against a canvas board. The ground must have wrapped over the edges of the board, resulting in the integrally cast lip reproduced along the margins of the plaque.

Of the four additionally documented casts, the present author has studied three. Of the group, the Cagnola and Bowdoin examples feature the least amount of treatment with respect to the relief’s surface. A simplified nimbus and handsomely scrolled pattern in the drapery of the flagellants characterizes the Cagnola example, while a stippled texture rendered by a finely handled punch tool suffices for the draperies and floor pattern of the Bowdoin cast. The Carrara example is the finest in quality with all details of the relief crisply featured. Its finishing incorporates a complicated pinstriped perizonium for Christ and a diamond-patterned cloak for one of the scene’s attendees while other characters boast finely executed punched draperies. The present example, however, is the most complicated in respect to its surface details. The finely punched drapery of the flagellants is expertly handled, while the flagellant on the right features additional textures on his garments, rendered through hammered, hatched and striated treatments. Like the Carrara example, Christ’s perizonium is pinstriped though the present relief differs from others with its ornately patterned cloaks featured on the left and right-most characters in the scene.

In consideration of the composition’s diffusion through painted and engraved reproductions it becomes difficult to place an exact locus for its origin. The Netherlands, Italy and Spain are all worthwhile considerations. However, the present author leans more strongly toward a Spanish origin primarily due to the decorative textures exhibited on the clothing of the present relief. Christ’s pinstriped perizonium is a common feature found in Spanish art though it can appear at times in Flemish depictions of Christ and with a bit less frequency in Italian depictions. Of particular note are the ornately patterned textures on the left and right-most characters on the present relief. While similar textures can sometimes appear on Flemish plaquettes they tend to more readily recall the results of the estofado technique used by Spanish painters in the art of polychromy and patterning of drapery upon wood sculptures.[4]

Special thanks to Attilio Troncavini for providing additional details regarding examples of the Flagellation of Christ located in Italy and to Doug Lewis for his comments via private communication. 1. As Spain was a chief launching point for the exploration of the Americas the feature of a headdress could imply influences from the New World.

4 For instance, an example of Spanish art featuring all of the same textural qualities found on the present relief can be observed in Diego de Pesquera’s Holy Family with Saints Anne and Joachim at the MET (Inv. 45.128.5)